Following up on my last post about the value of being there, about the value of meeting face-to-face, here is my take on video based communication. Video is becoming ubiquitous online, replacing more and more written content. But in most enterprises it is still only an (expensive) content marketing tool.

The world view of Periscope and others that video should be easy to broadcast and that it does not have to be professionally produced, hasn’t really made it into the corporate world yet. When it comes to external communication you could argue that it makes sense, at least if quality is one of your brand values. But for internal use it is odd that video still has not taken off in most companies.

It has neither taken off for real-time communication (video conferencing still kind of sucks), nor for sharing information. And here production quality is definitely not key. Clarity and reach is perhaps most important for internal communication, but video makes it a lot easier to also express feelings. Excitement, urgency and importance are all feelings much easier communicated visually than in text.

Video also builds trust easier than text does, and it creates the feeling of being closer to the person delivering information.

Why is video not used then?

So if video has obvious advantages over written text, also for internal communication, why is it not taking off?

I see mainly two reasons. In medium and large corporations, which is where internal comms beyond water cooler talk is needed, it is primarily about comfort zone(s). Historically recording, editing and distributing video was hard. Equipment was expensive, editing time consuming and file sizes distribution prohibitive. For that reason most people haven’t recorded, edited and distributed a lot of video in the past. Getting into new habits is always hard. And to be frank, few people in medium and large corporations were first in line to publish on YouTube or broadcast on Periscope. Having said that, most consumer video platforms have been around for a while, and not being a millennial is no longer a good enough excuse.

Second reason is that it is still not necessarily a breeze to record and distribute video. Writing text and including a couple of images is still faster, but the gap is closing. Got an iPhone? Point, shoot and then use iMovie on your phone to edit it in a couple of minutes, and you’ve got something thats in most cases is good enough for internal use.

So video has value, there’s no doubt about it. And the main reason people don’t use it for internal communications their comfort zone. People are not used to recording, editing and distributing video. But 2016, it is actually not that hard. While it is still easier to write up text, creating videos is getting easier by the day.

So my challenge to you is: just do it.

People don't use video for internal comms because of comfort zone! Just do it! #prodmgmt Click To Tweet

Go ahead and record a video next time you have information you want to share, your message is going to get across with a lot more clarity! 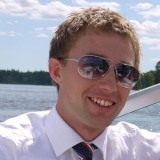 Passionate product manager with a love for technology and innovation. More about me.